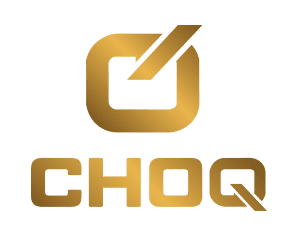 CACAO AS IT WAS MEANT TO BE EXPERIENCED

Cacao isn’t what it used to be.

The chocolate industry has tampered with this ancient superfood to produce beans with better yields but less flavor, sacrificing quality for profitability.

That’s why it’s extremely hard to find the real deal: Heirloom Beans with the certifications to prove it.

CHOQ® Organic Bolivian cacao beans have been recognized at the Cocoa of Excellence Competition, are free of pesticides and GMOs, and have a richer, less bitter flavor profile.

Ready to experience cacao the way the ancients did? Try these beans today and take your smoothies to the next level!

FOOD OF THE GODS

WHY CONSCIOUS CACAO IS CRITICAL

Despite Dr. Lewin’s statement, there’s no conclusive research proving that cacao can make someone live longer, but while it may or may not increase the quantity of life, anyone who’s ever tasted good chocolate wouldn’t doubt that it increases the quality!

In the 18th century, a scientist by the name of Carl von Linnaeus gave the cacao plant the official designation of Theobroma cacao, a term that comes from the Greek words Theós (god) and Brôma (food).

The Swedish botanist named this sacred plant in the spirit of the indigenous Central Americans who truly believed it was a gift from the gods and had used it ceremonially for thousands of years before westerners discovered it.

Millions of people throughout the world revere it for its energizing, motivating, and health-promoting properties, but while indigenous cultures still view Theobroma cacao as a sacred plant, most of the chocolate industry, unfortunately, does not.

If you consider yourself a conscious consumer, then you know how important it is to be informed about where your products come from, what’s in them, and who made them.

Conventional cacao trees are sprayed with all manner of pesticides, including organophosphorus compounds such as chlorpyrifos, pirimiphos-methyl, and diazinon, as well as other synthetics such as allethrin, lambda-cyhalothrin, deltamethrin, and many other substances with negative effects on human health.

That’s why our cacao beans are certified organic, meaning that they are GMO-free and grown without the use of these dangerous chemicals.

Cacao plants are also healthier when they’re grown without the use of pesticides, as they must be grown in higher quality soils with greater nutrient content.

Only when a plant is allowed to grow without the use of chemicals can it be fully itself.

Over 80% of the world’s cacao supply is a variety known as Forastero, a plant with different genetics that make it easier to grow but often less flavorful.

The most delicate, authentic variety of cacao is called Criollo (pronounced “kree·oh·low”), a plant with the original genetics of the wild cacao trees that populated the mountainous tropics of Central America.

CHOQ Organic Heirloom Cacao Beans are lab-certified through the Heirloom Cacao Project to possess 97.3% wild-type Boliviano genes (a kind of Criollo from Bolivia), making them some of the most authentic and delicious beans available.

These beans are delicate in both senses of the word, though.

They’re extra hard to grow, especially without pesticides.  Simply put, they’re needy.  They require lots of care and attention, and if they weren’t so exquisitely flavorful, farmers wouldn’t even bother growing them.

It’s extremely sad that so few people know where their chocolate comes from, and the barbaric practices they are enabling when they buy from many of the larger brands.

About two-thirds of the world’s cacao beans come from West Africa, a place where child labor laws are either nonexistent or rarely enforced.  As of 2015, over 2 million African children were reported to be working under dangerous conditions for next-to-nothing in this part of the world.

Significant pressure has been put on the chocolate industry’s largest companies to eradicate this horrific practice, but even today, after two decades of empty promises, these companies are still unwilling to give any guarantees that their products were produced without child labor.

Our beans come from a small farm in Buena Vista, Bolivia, where workers are compensated fairly and children are not forced to work for pennies.

Unlike so many other companies, we can tell you exactly where our beans came from and who cultivated them.

You can find organic cacao beans just about anywhere these days, but hardly any of them have lab-verified heirloom genetics. 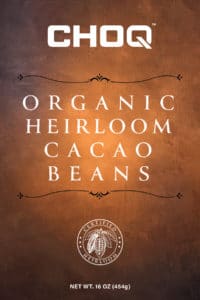 Now you can enjoy cacao the way the ancients did, unsullied by chemicals, poor hybridization tactics, and unethical labor practices.

Click here for link to the Heirloom Cacao Project

THE MOST DELECTABLE SUPERFOOD ON THE PLANET SHOULD BE GROWN, NOT ENGINEERED

Ever compared a conventional tomato to an heirloom one?  If so, you know they’re nothing alike.

Humans love to improve things, but sometimes our attempts to make something better have unintended consequences.  When we hybridize plants, we’re often doing so without respect to nutrient content or overall quality.

Just like so many other major industries, “Big Chocolate” primarily cares about 3 things:

What else would you expect from an industry that uses child labor?  Sure, their products are cheaper, but if you wanted dirt-cheap conventional cacao beans, you wouldn’t be buying from CHOQ.

Cacao is more than just a dessert.  It’s a superfood with thousands of years of use by traditional cultures who treated it with the reverence such a sacred plant deserves.

Only an organic, ethically-grown, premium heirloom product can truly honor the legendary Theobroma cacao, the food of the gods.

The health benefits of cacao include:

Cacao naturally contains an array of potent free radical scavengers that protect your cells against damage.  Research has found that it has significantly greater quantities of polyphenol antioxidants than red wine and even green tea, which is renowned for its high antioxidant content.

We don’t have to tell you that eating chocolate makes you feel good.  This sacred plant is more than a mere stimulant, though.  It contains a compound called anandamide, also known as the ‘the bliss molecule’, which supports the endocannabinoid system in the brain, as well as phenylethylamine, which can support healthy dopamine levels and concentration.

Some of the same polyphenols that give cacao its antioxidant benefits are also known to boost nitric oxide, a critical compound that your body uses to open up your blood vessels and ensure healthy circulation.  If you’re looking to support cardiovascular and circulatory health, raw cacao is an excellent choice.

An Excellent Source of Critical Minerals

Cacao beans are a great source of Magnesium and Potassium, the two electrolytes that most modern people are low in.  Magnesium is a crucial mineral that helps both the muscles and the blood vessels relax, while potassium is extremely important for the heart and nervous system to function optimally.

WE HAVE A LIMITED QUANTITY, SO THESE ARE ONLY AVAILABLE WHILE SUPPLIES LAST.

Do you consider yourself a connoisseur?  Are you ready to get snooty about your cacao?  If so, these beans are for you.

These are single-origin from a small farm, and once they run out, you’ll have to wait until the next harvest, so be sure to stock up!

Be advised, though: after you buy these, you’ll be a chocolate snob forever.

Don’t say we didn’t warn you! 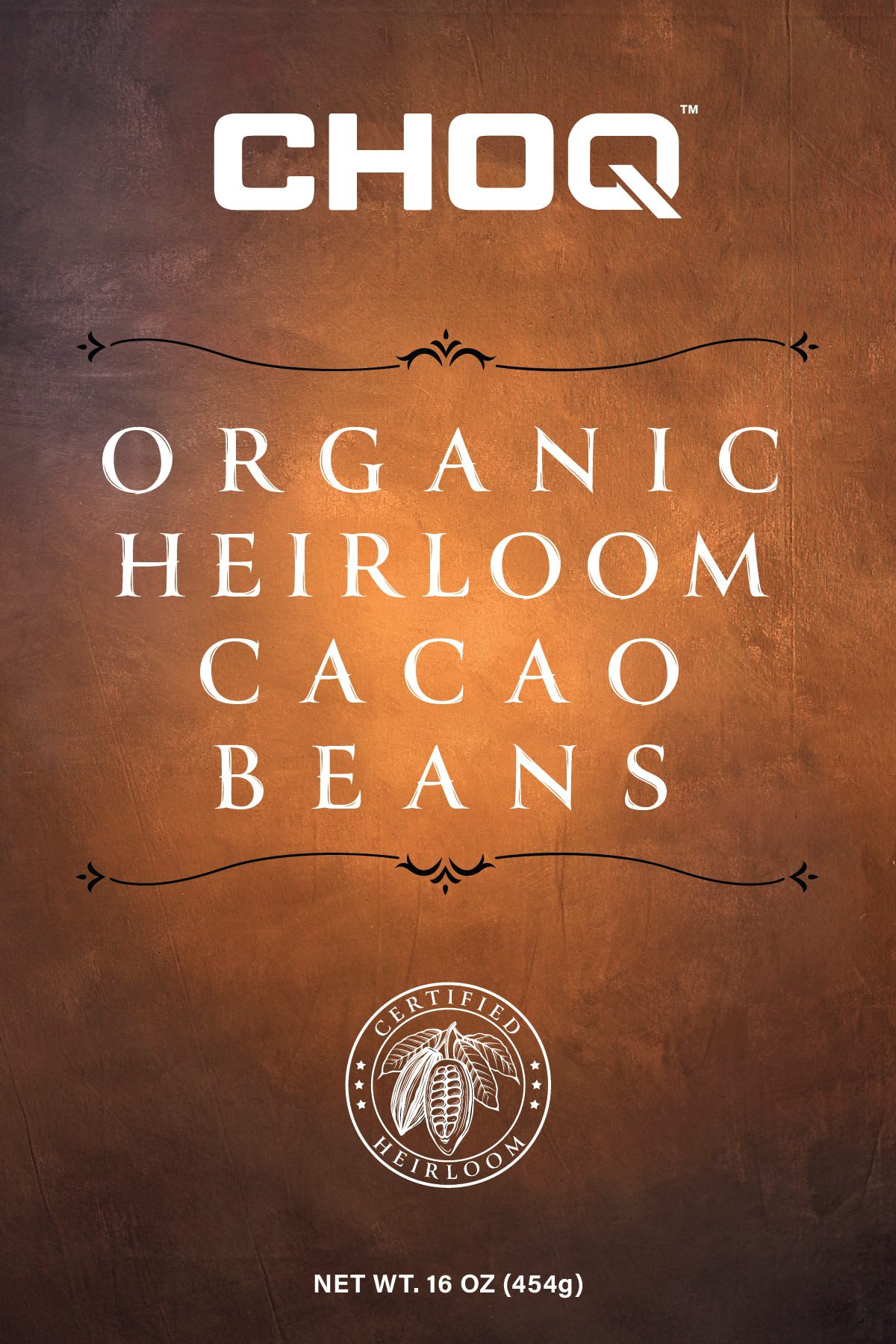 Your smoothies will never be the same.