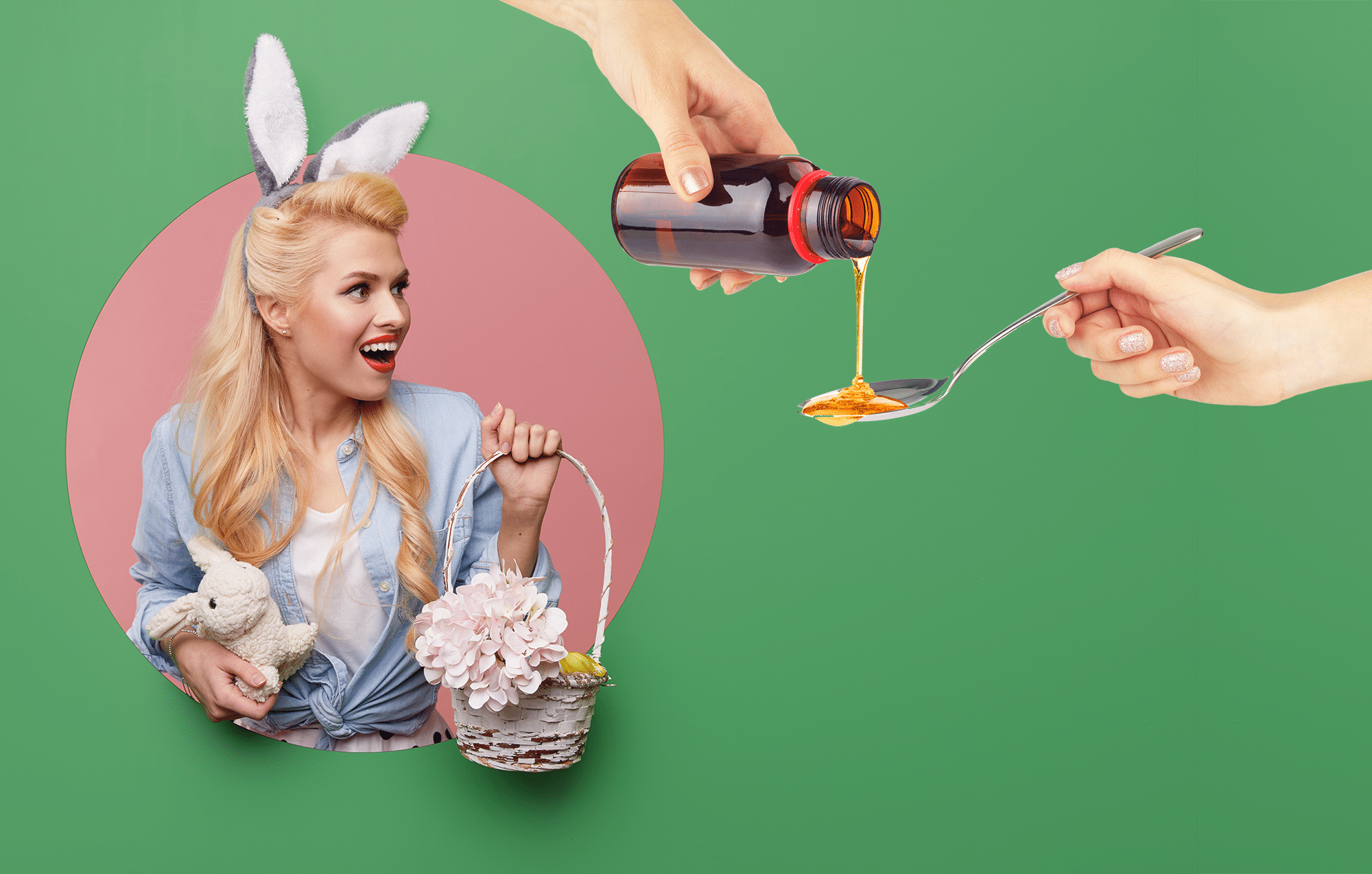 Down the Rabbit Hole: Your Brain on Histamine

“I’m not strange, weird, off, nor crazy, my reality is just different from yours.”

– Lewis Carroll, Alice’s Adventures in Wonderland & Through the Looking-Glass

It’s been pigeonholed as the harbinger of hives, tears, and snot, but it’s also capable of affecting our brain in surprisingly profound ways and altering our perceptions of reality.  This is your brain on histamine.

In 1910, the English scientist Sir Henry Hallet Dale discovered histamine and proceeded to, in typical early 20th-century pharmacologist fashion, inject it at random into various animals, such as rabbits, guinea pigs, frogs, dogs, cats, and even goats.

He found that it provoked a variety of reactions in these ill-fated creatures, including altered blood pressure, vasodilation, sedation, labored breathing, heart failure, vomiting, loss of bowel control, and “bronchial spasm” (also known to the layperson as coughing).

But coughing rabbits aside, not all the effects of histamine are negative.  Our beloved Sir Henry was just barely scratching the surface of what this molecule does, both physiologically and pathologically.

In addition to driving allergic inflammatory responses, histamine also regulates gastric acid secretion in the stomach and serves as a powerful neurotransmitter that the brain uses in order to produce normal states of wakefulness and maintain the circadian rhythm (and it can even trigger adrenaline).

In healthy people, histamine-producing neurons are highly active during the day and relatively inactive during sleep (especially REM sleep).

Given this relationship, then, it’s not surprising that some of the research aimed at developing treatments for narcolepsy is based on this strong relationship between histamine and sleep.  The psychostimulant drug modafinil, which is used by both narcoleptics and commercial pilots on long flights, works in part by boosting histamine in the nervous system.

Histamine helps us stay awake, so an abnormally low level will produce sedation.  Anyone who’s ever taken an old-school antihistamine like Benadryl® (diphenhydramine) and barely been able to keep their eyes open can attest to this.

Before the 1950s, there were no drugs called “antipsychotics”, but in December of 1951—at the dawn of what historians call the “psychopharmacological revolution”—some researchers were looking at compounds which might serve as antihistamines and synthesized something they named chlorpromazine, a drug that ushered in an entirely new era in psychiatry.

Upon experimentation, this drug was found to powerfully block histamine as well as cause profound sedation, easing the symptoms of agitation and mania that are so common with mental patients.  Shortly thereafter, it found its way into psychiatric wards all over the world, and by 1955 had been adopted in Europe, North America, South America, Russia, and Australia.

After the marketing team had their way with it, this brand new “miracle drug” was given a new name: Thorazine (although it was also called Largactil, in reference to the large number of conditions it acts on).

One study showed that histamine metabolites in the cerebrospinal fluid of schizophrenia patients are 2.6 times higher than normal.  Sufferers of schizophrenia have also been shown to possess fewer histamine receptors than healthy controls, which also implies larger circulating quantities of histamine.

One of the enzymes that breaks down histamine is called HNMT, or histamine N-methyltransferase (the other is called DAO, or diamine oxidase).  Mutations in the gene that codes for HNMT have been found to be associated with Parkinson’s disease, ADHD, and schizophrenia.

This isn’t to say, of course, that a gene defect is the sole cause of these diseases.  As I covered in my article on the many causes of depression, genes are almost never the root cause of diseases, but rather just factors that predispose someone to being more susceptible to the true causes.

One of those true causes is mercury.

Ask the Mad Hatter about how he got to be so mad, and he probably couldn’t give you a straight answer.  Case in point.

Ask his wife, however, and she would tell you, “it’s from all that mercury that he works with when he’s curing felt at work!  Oh how I wish he’d stop making hats and become a barber like his brother!  Now that’s a stable man!”

Mercury is infamous for causing all manner of neurological and psychiatric illnesses.

The evidence uncovered by biochemist Boyd Haley, PhD that links mercury to Alzheimer’s disease is particularly breathtaking, for example, with its detailed explanations of how this heavy metal runs amok in the brain by interfering with key enzymes.

Considering that histamine and mercury are both highly neuroinflammatory and also both associated with a number of psychiatric and neurological conditions, it makes sense that mercury itself can elevate histamine in the brain.

Researchers have proven that mercury can stimulate mast cells, which are the cells that store histamine and other inflammatory mediators as “granules” and then release them when activated (a process called “degranulation”).

Other heavy metals such as lead, bismuth, and cadmium have been demonstrated to have this effect on mast cells as well.

Histamine intolerance is also extremely common in children with autism, and many of them have impaired detoxification of heavy metals because their glutathione systems barely function.  Could these be related?

MCAS is a relatively new disorder in which mast cells inappropriately release histamine and other pro-inflammatory compounds into the body, causing all manner of problems for people, many of which are psychiatric in nature.

Noting that most physicians are not familiar with MCAS and are ill-equipped to identify it, Dr. Tsafrir goes on to say:

“When patients consult their primary care doctor with many seemingly random dramatic complaints affecting unrelated organ symptoms, which often feature prominent psychiatric symptoms, they are often thought to be suffering from a psychosomatic condition and told, “it’s all in your head.” They may be sent home with a prescription for an antidepressant or anti-anxiety medication, which not only is experienced as invalidating but does not address the root cause of their symptoms.”

Dr. Tsafrir is on the cutting edge of her discipline in that she understands this relationship. Interestingly, in addition to a low histamine diet and various pharmaceutical antihistamines, she also recommends quercetin to keep histamine in check for those suffering from MCAS.

A naturally occurring phytochemical found in onions, apples, red grapes, citrus fruits, and leafy greens, quercetin is an extremely effective mast cell stabilizer and has a multitude of beneficial effects.

Further reinforcing the relationship between histamine and mood, quercetin has been demonstrated (albeit in a mouse model) to calm anxiety and normalize the functionality of the hypothalamic-pituitary-adrenal (HPA) axis.

Among the multitude of herbs and phytochemicals that are known to regulate histamine–such as astragalus, siler, nettle, and bromelain–quercetin may be the single most effective in this regard, and is considered the most thoroughly researched of all bioflavonoids.

A Few Highlights on Quercetin:

Histamine is the Future

(Well, in the sense of what it represents within the context of this article, anyway.)

Our mental states are intimately intertwined with the inflammatory ebbs and flows that occur when our immune systems deal with the daily onslaughts of pathogens, toxins, poor dietary choices, and stressors.

Histamine is the posterchild for integrative/functional psychiatry, a compound that links the mind to the immune system and reminds us of how connected everything in the body really is.

We’re inching closer to the inevitable future where integrative medicine will be the dominant paradigm as we start to look at these deeper relationships in the body and cast away the old isolationist perspective of conventional medicine in which we artificially separate all the systems in the body and blind ourselves to these deep connections.

If, now that you’ve gone down the histamine rabbit hole, you recognize some of these symptoms in yourself, and feel as if you may suffer from MCAS or any form of histamine overload, consider consulting with a nutritionally-informed medical practitioner.

The right supplements may prove life-changing if you do in fact have an issue with histamine, in particular glutathione, NAC, vitamin C, quercetin, zinc, alpha lipoic acid, selenium, reishi, chaga, astragalus, and nettle leaf (although everyone is different and your results may vary).  Elimination of dairy and gluten is also highly beneficial for most people with excess histamine.

Remember, though: even though it sounds like we’re placing the blame on histamine and mast cells, it’s almost never the immune system’s fault.  No victim-blaming allowed.

There are dozens of reasons (especially chronic Epstein-Barr Virus) why mast cells may go haywire, and so it’s best to keep in mind that your body is doing its best under extraordinarily challenging circumstances, and it needs all the support it can get.

Let’s work with the body, never against it, and appreciate it for all the great work that it does day in and day out to keep things running as smoothly as possible.