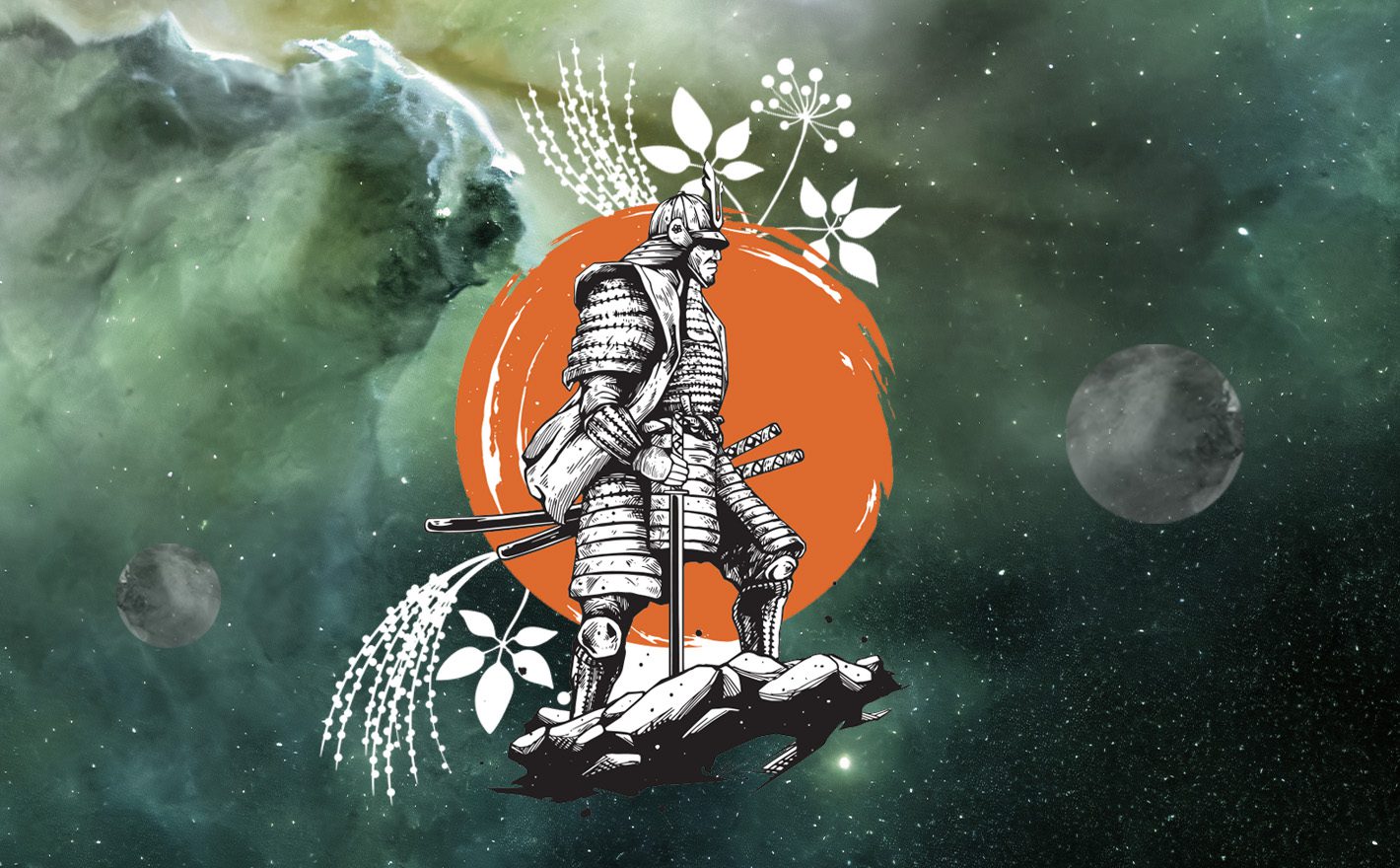 Herbs for Protection: the Science and Spirit of Sage and Mugwort

Throughout history, people all over the world have used certain aromatic herbs for protection, to soothe the spirit, heal a variety of ailments, and cleanse spaces of negative energy.

The two most common of these herbs, Sage and Mugwort, are just as popular today as they were hundreds of years ago, and for good reason.  Whether or not you believe in the existence of subtle energy or spirits, there’s ample reason to love these plants, as they have numerous health benefits that have been confirmed by modern research.

The most common herbs for protection are in the Sage and Mugwort families, which have a wide variety of species, but in this article we’re going to focus specifically on these 2 highly revered botanicals:

Here in CHOQ Nation, we’re all about using herbs for protection.

We use world-class adaptogens like Ashwagandha, Tongkat Ali, and Shilajit to deal with the devils of the modern day: stress, poor nutrition, and toxins.  We also love aromatics like Sage and Mugwort, though, as they can refresh a space like nothing else. 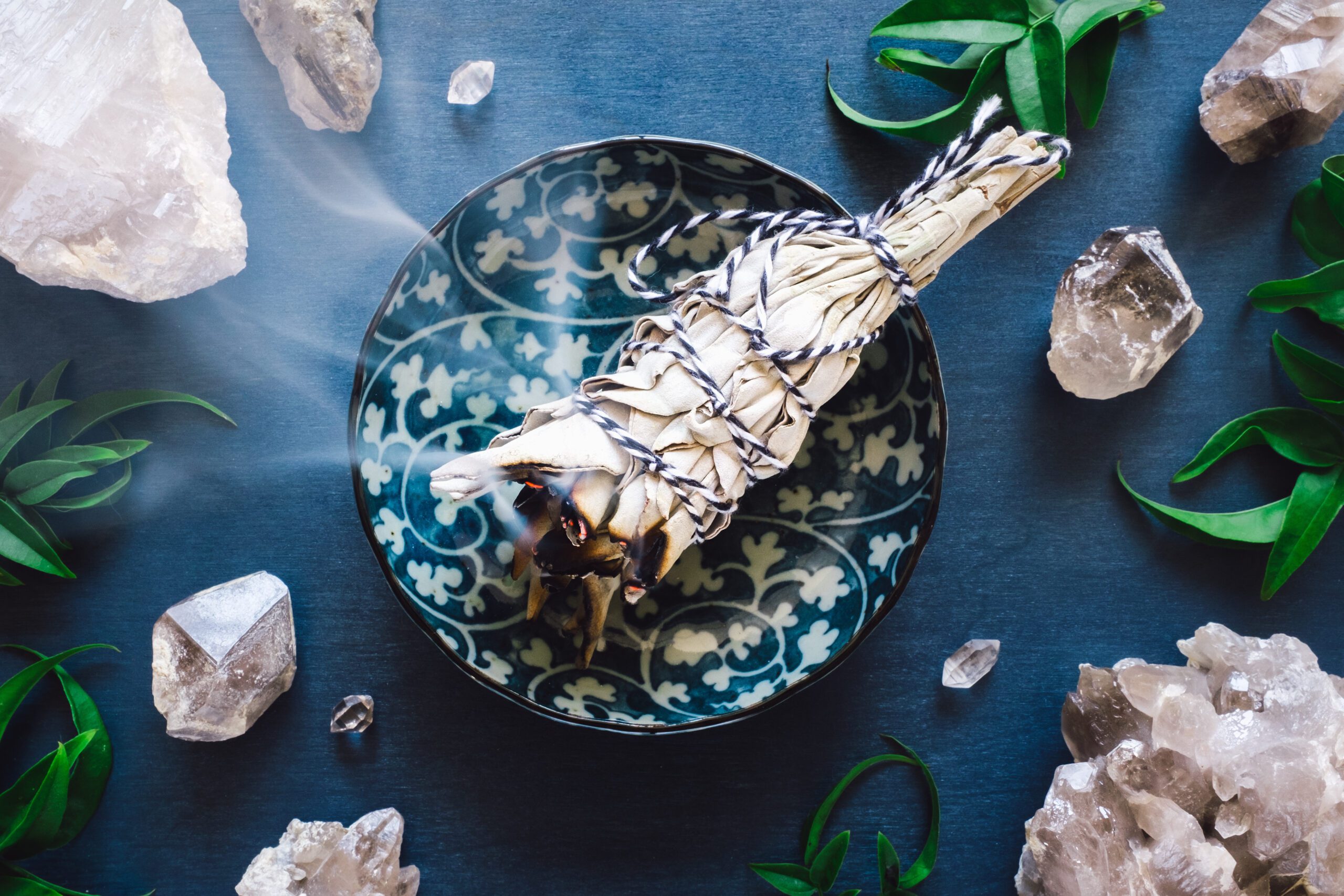 Of all the protection herbs out there, White Sage (Salvia apiana) is the most well-known in the United States, due to the fact that Native Americans (particularly in the northwest) have a long history of using it for purification ceremonies and to heal different ailments.

It’s been used for centuries by indigenous people for issues like colds, coughs, sore throats, constipation, and poison oak rashes.  Native Americans have also used it to reduce anxiety, which is not surprising, as many people report that burning sage has an immediate calming effect.

Interestingly, white sage has a tremendous amount of research behind it that supports the idea that it can protect you against various pathogenic microorganisms.

According a paper titled ‘Phytochemical and biological evaluation of Salvia apiana’, White Sage contains an abundance of antimicrobial phytochemicals, with one article claiming that smudging the room for one hour reduced the airborne bacteria in the room by 94%.

Because it has a long history of use for immune support among Native Americans, and because so many of the phytochemicals it contains can fight microbes, it makes lots of sense that burning sage could reduce airborne pathogens.

Some of the phytochemicals in white sage that offer protection from microbes include:

Interestingly, some of these compounds are also found in rosemary (Salvia rosmarinus) and many other forms of sage, such as the kind you might use on your potatoes (Salvia officinalis).

Terpenes, Sageone, and the Mood-Boosting Effects of White Sage

According to another study on White Sage, several terpene molecules in the plant were found to bind to cannabinoid receptors in the brain (the same receptors that THC and CBD from cannabis affect).  Terpenes are also commonly found in cannabis, so it’s not surprising that these compounds were found to affect these types of receptors.

The most potent of these special phytochemicals was sageone, another compound that also occurs in rosemary.  In addition to binding to the CB1 and CB2 cannabinoid receptors, sageone can mildly activate opioid receptors.  Thus, sageone and the other terpenes in White Sage seem to be the molecules most responsible for its ability to uplift our mood.

Why Do People Burn Sage?  Sage Smudges, Spirits, and the Benefits of Burning Sage

Indigenous people (and many modern people as well) believe that burning white sage can protect you against negative energy as well as malevolent spirits.  When negative and stagnant energy is transmuted by burning it and surrounding oneself with the aromatic smoke, then one can clear impurities of the spirit and remediate toxic emotions like sadness and anxiety.

As we’ll see when we get to our next energetic protection herb, Mugwort, the idea that burning an aromatic herb can help you get rid of negative energy and spirits is not unique to Native Americans.  In fact, it was practiced by many people from all over the globe who never had any contact with them.

If this many different cultures all used smudge sticks for this purpose, that does beg the question of how they all figured out that burning aromatic herbs can be beneficial for your health independently.

How to Burn Sage and other Protection Herbs Safely

Because using protective herbs usually means burning them and producing lots of smoke, smudging yourself with a Sage bundle requires a bit of work and some attention to safety.

In addition to having a bowl to catch the ash, it’s also a good idea to wear some kind of glasses while you’re smudging in order to protect your eyes.  This is because sometimes the bundle will shoot off a small ember in a random direction, and it’s better to be safe than sorry. 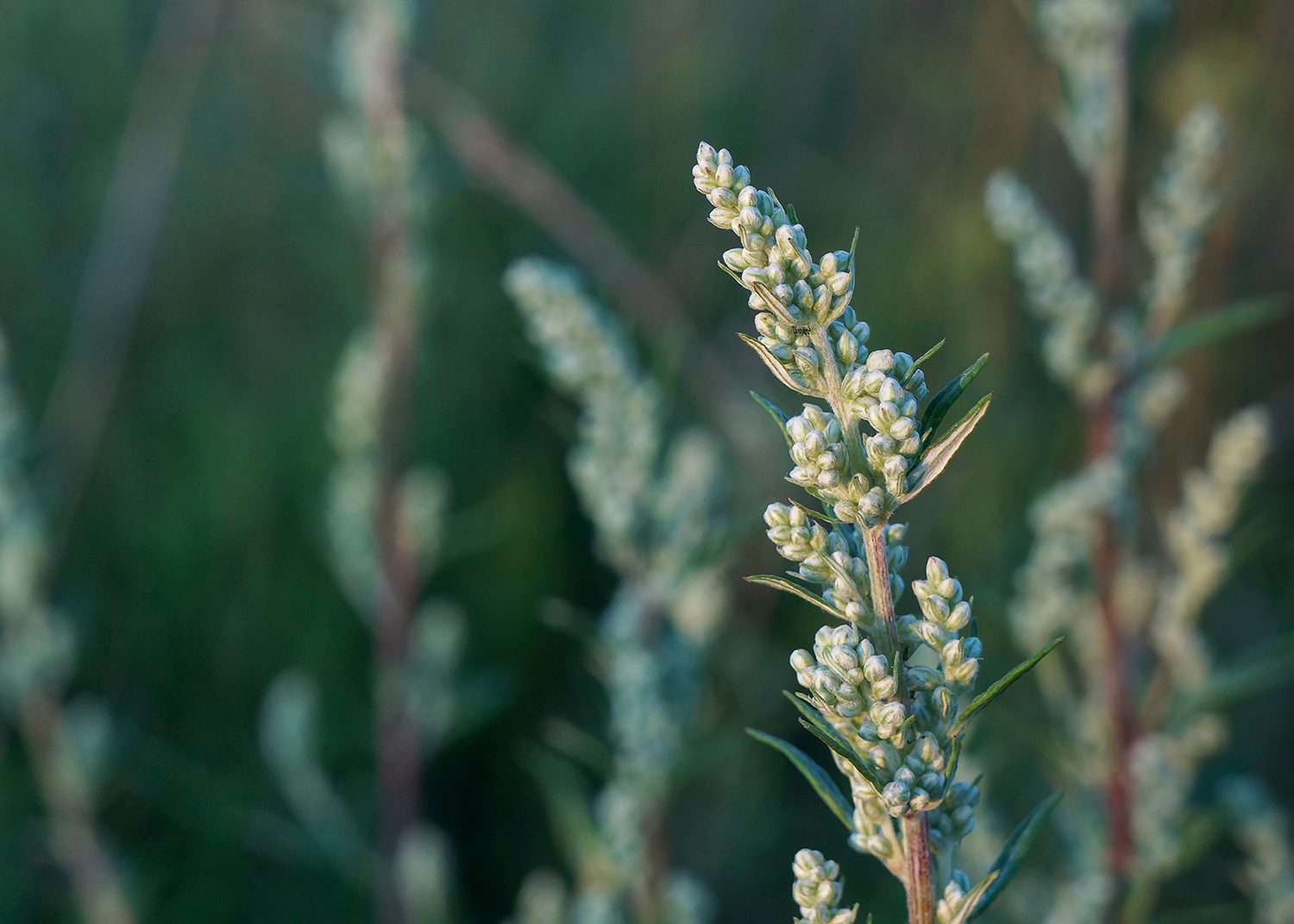 Also called ‘the mother of herbs’ in the middle ages, Common Mugwort has a long history of use by European people as one of their favorite herbs for protection and to purify the air.  According to DuMont’s Grand Encyclopedia of Herbs:

“Artemisia vulgaris was held in high esteem by the Anglo-Saxons and the Celtic Druids. It was one of the nine herbs that were believed to ward off evil and poisons. Called the ‘mother of herbs’, mugwort was associated with magic and fertility rituals.”

In addition to Europe, Common Mugwort is also native to Alaska, Asia, and North Africa.  Mugwort has been used for a variety of purposes.  According to this paper, Common Mugwort contains essential oil, flavonoids, and sesquiterpenoid lactones, among other interesting compounds (which we’ll get into later when we talk about its effects on dreaming and its connection to the legendary ‘green fairy’).

It’s been used by Ayurveda, Chinese Medicine, and throughout Europe to soothe digestive issues and to regulate the menstrual cycle.  Phytochemicals in Common Mugwort have antioxidant properties and can help protect the liver, reduce pain, and fight microorganisms like bacteria, fungi, and parasites (hence the name ‘wormwood’).

Note that pregnant women should never take Common Mugwort internally, as it may harm the fetus.

People use Common Mugwort smudge sticks in exactly the same way that they use White Sage: to clear the air of negative entities and cleanse the energy field around the body.  Unlike White Sage, however, Common Mugwort is a member of the daisy family, has a particularly sweet aroma, and is said to induce more visionary states.

Just as with White Sage, it looks like Old Uncle Henry is likely to clear airborne pathogens from the air.  Although there has not been adequate scientific research on Common Mugwort’s ability to reduce microbes in the air, it seems likely since the plant is known to have these general benefits in the body.

In some traditions, Common Mugwort is used for divination purposes.  It’s commonly taken as a tea before meditation in order to help to connect to the spiritual realm and receive higher guidance.  While its phytochemicals don’t seem to affect cannabinoid receptors, as with White Sage, they do seem to be psychoactive.

This makes sense because Common Mugwort is particularly famous for its mysterious effects on dreaming.

Many people use Common Mugwort for lucid dreaming.  It’s reported to produce vivid dreams and generally make it more likely that you’ll remember that you’re dreaming so that you can let your imagination run wild while you sleep.

Although there isn’t any scientific research on Mugwort’s effects on dreams, many people report that it does have this effect.  Scientifically speaking, Mugwort is an oneirogen, which is just a more technical sounding way of saying that it can produce or enhance dreamlike states of consciousness.

It’s likely that Common Mugwort gets its oneirogenic effects from a compound called thujone, which is the same compound that its bigger brother, Grand Wormwood, also has an abundance of.

Why is this significant?

Despite its reputation as a hallucinogen, absinthe is not remotely as potent as most people think.  Now legal in the United States and in most countries, absinthe can be consumed casually at a variety of bars, and has relatively subtle effects.

Thujone is known to be psychoactive, however.  Interestingly, Salvia officinalis (again, the sage we usually use as a culinary spice) also happens to contain thujone, albeit a slightly different molecular version.

This molecule, also a terpene, inhibits GABA receptors in the brain.  GABA is your nervous system’s primary calming neurotransmitter, and so thujone acts as a kind of stimulant by reducing GABA’s relaxing effects.

Absinthe drinkers tend to get less tired than consumers of regular alcohol, and this effect may be due to the presence of thujone.  Because absinthe contains a wide variety of different botanicals, though, its unique effects may be the result of more than just Grand Wormwood.

It’s possible that absinthe became a nuisance back in 18th century Europe simply because its stimulant properties allowed people to drink more than they normally would.

As a neurotransmitter, GABA is heavily involved in the regulation of sleep and dreaming, and so it seems likely that thujone is the main reason that Common Mugwort is able to induce lucid dreams.

Just because we’re getting a better understanding of how these herbs affect our biochemistry, that doesn’t mean that they don’t also work on subtle energetic levels that science doesn’t understand.

People who think in terms of scientific reductionism and believe on principle that things like spirits and subtle energy don’t exist are often far more closed-minded and less scientific in their thinking than they purport to be.  You are not a machine and science has yet to explain all the mysteries of the universe.

Scientific research should be used to enhance, not to abolish, ancient ideas about how plants can help us.  It’s best to stay humble and remember that we can’t explain everything using chemistry.

Herbs for Protection Against Modern Evils

As mentioned in the beginning of the article, just as people since time immemorial have used herbs for protection against evil spirits and negative energy, people now use them to protect against the evils of the modern world.

Today, we’re beset by toxins, EMFs, endocrine disruptors, and huge quantities of stress.  These all drain the life force from our bodies and make it hard to live up to our full potential.

Adaptogens like Shilajit and Ashwagandha–especially when stacked together–are some of the best solutions to maintain your vitality amist the chaos.  Once you get a good herbal regimen going, and you can see the profound benefits to your mind, body, and spirit, you won’t want to be without them for long.

In a world that seems to get crazier and more stressful every day, in which we live largely separated from mother nature, herbs are one powerful way that we can reconnect to the planet and to our true nature.

Matt Dorsey is a Doctor of Acupuncture and Chinese Medicine, medical herbalist, clinical nutritionist, and supplement industry veteran. As our Chief Product Officer, he heads product development and relies on his extensive training to ensure that our supplements are safe and effective.
Sign up Now for our
best holiday specials
Get priority access to our ridiculously good Holiday specials and participate in our legendary giveaways