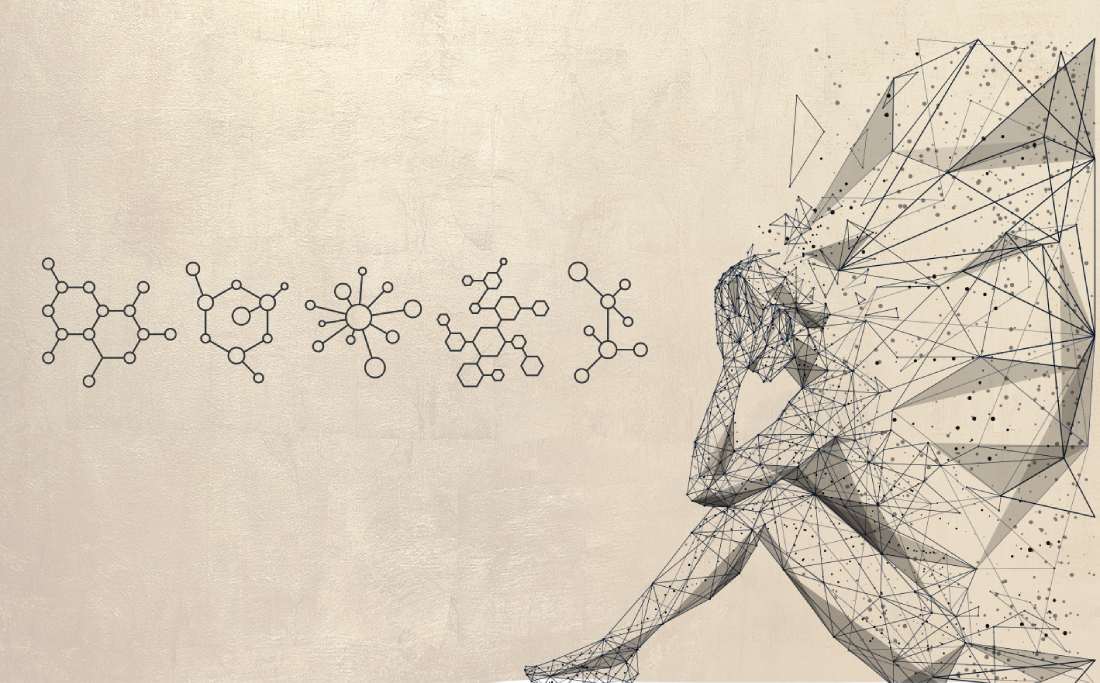 Is Depression Actually Caused by a ‘Chemical Imbalance’?

How many times in your life have you heard the idea that mental illnesses like depression are caused by a ‘chemical imbalance’?  Most of us have heard the phrase repeated hundreds if not thousands of times.

If you want to get people to believe that something is an indisputable law, repetition is the key.  That’s the simple fact of the matter.

And that begs the question, “what’s the most repetitive thing around?”  A good guess might be the television commercials playing every ten minutes for more than five hours a day in the average US household.

Considering that the pharmaceutical industry spends $6 billion a year on advertising, it’s not surprising that so many of us have assumed that the ‘chemical imbalance’ theory is the best model for explaining depression (on a side note, advertising drugs directly to consumers wasn’t even legal in the US until 1997 and still isn’t in nearly every country in the world).

As a result of the many campaigns to popularize this explanation for mental illness, most people still believe the ‘chemical imbalance’ theory is:

However, in his article on the ‘chemical imbalance’ concept, psychiatrist Dr. Roland Pies states that:

“The legend of the “chemical imbalance” should be consigned to the dust-bin of ill-informed and malicious caricatures.”

Dr. Pies then goes on to say:

But, while Dr. Pies does his best to portray a picture in which the mainstream medical establishment never promoted the ‘chemical imbalance’ theory of mental illness, psychologist Dr. Philip Hickey, PhD, believes Dr. Pies is very much mistaken, saying:

“The fact is that psychiatry, at both the organized and individual level, did promote, in characteristically dogmatic fashion, the notion that depression and other significant problems of thinking, feeling, and/or behaving are caused by chemical imbalances in the brain, and are best treated by drugs and other somatic measures.  Nor was this an innocent error.  They promoted this fiction even though they knew that it was false, because it suited their purposes and the purposes of their pharmaceutical allies.  This falsehood was promoted vigorously by psychiatrists and by pharma, and tragically has been accepted as fact by two generations in western countries and increasingly in other parts of the world (emphasis mine).”

So the debate rages on as to whether this unproven hypothesis was entirely promulgated by the drug companies, or was equally the work of the psychiatric establishment.

What’s clear is that belief in the ‘chemical imbalance’ theory is very much on the decline—despite the shadows of such an antiquated, oversimplified explanation that we’re still dealing with today.

Much in the same way that nuclear radiation has a tendency to stick around for decades after a large bomb is detonated, we’re still dealing with this failed theory’s disastrous fallout.

But why is the theory so inaccurate?  It certainly seems plausible, does it not?  And don’t people feel better when they take a serotonin-boosting drug?

Let’s take a deeper look at the logical nuts and bolts underneath the ‘chemical imbalance’ explanation.  If we break it down to its basic logical architecture, we could express the idea like this: 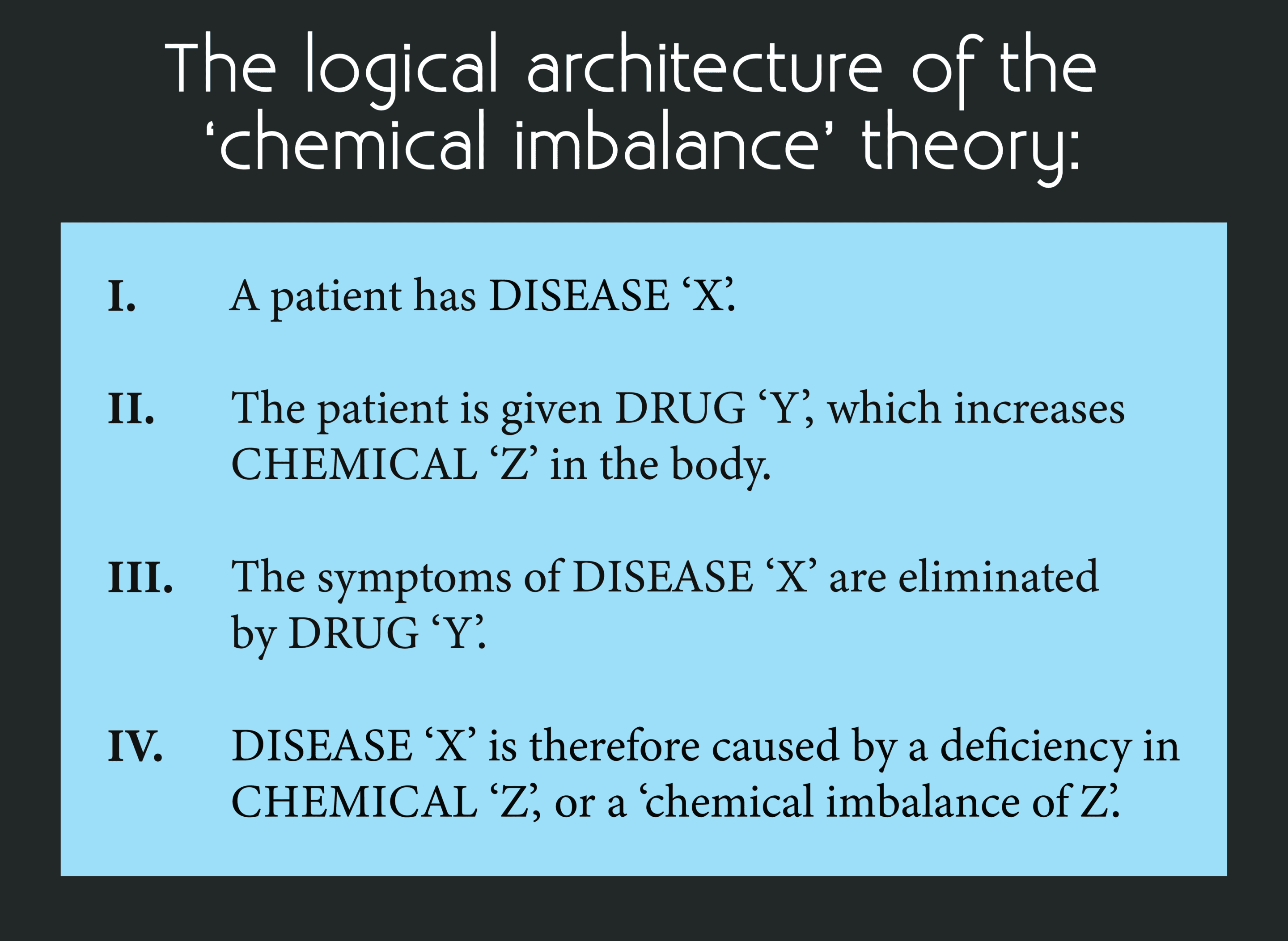 A patient has Depression.  The patient is given an Antidepressant, which increases Serotonin.  The symptoms of Depression are eliminated by the Antidepressant.  Depression is therefore caused by a deficiency in Serotonin, or a ‘chemical imbalance of Serotonin’.

Now, let’s see what happens when we fill these variables in with a different disease, like chronic pain:

Chemical Z = Opioids [note: like serotonin, opioids such as endorphins also naturally occur in the body]

A patient has Chronic Pain.  The patient is given Morphine, which increases Opioids.  The symptoms of Chronic Pain are eliminated by Morphine.  Chronic Pain is therefore caused by a deficiency in Opioids, or a ‘chemical imbalance of Opioids’.

So is chronic pain caused by a kind of opioid deficiency?  Of course it isn’t.  So why do we accept this same logic when it’s applied to mental illness?

According to medical journalist and author Robert Whitaker, the ‘chemical imbalance’ theory was scientifically disproven three decades ago, and never should have made it past the stage of a mere hypothesis.

In his lectures and books, he tells the story of the genesis of the ‘chemical imbalance’ hypothesis in the 1960s, as well as what should have been its demise in the 1980s, when study after study had shown that there was practically no correlation between the amount of serotonin in participants’ brains and their mood state (anyone looking to explore the history of this research is highly encouraged to check out Whitaker’s book ‘Anatomy of an Epidemic‘, arguably the most thorough work on the topic to date).

So does this mean that neurotransmitter chemicals like serotonin and dopamine have nothing to do with depression?  Not necessarily.

Boosting neurotransmitters has its place in the symptomatic treatment of mood disorders, regardless of whether it’s done naturally or synthetically.  The problem is when we pretend that we’ve truly fixed the ultimate problem when we haven’t even scratched the surface.

While neurotransmitters can undoubtedly play a role in mood regulation, they may be more of an intermediate cause than a primary cause.  For the subsection of people who may suffer from an inadequacy of serotonin or dopamine, it’s still critical to ask the question, “how did these compounds become deficient in the first place?”  There has to be an underlying cause, and it’s probably not genes.

So what actually causes depression and other mood disorders?

In reality, a myriad of factors can contribute to mental illnesses like depression and anxiety.  Some of these causes are biological in nature, such as chronic inflammation, poor nutrition, and alcohol abuse, and some of them are more psychosocial, such as trauma and social isolation.

Herpesviruses in the brain have even been linked to depression, and over two hundred commonly used prescription drugs have depression as a potential side effect.  It’s a complicated affair, and mental health professionals have their work cut out for them.

If we truly want to understand something as extraordinarily complex, individualized, and multifactorial as mental illness, we can’t allow ourselves to be satisfied by a dangerously simplistic, single-cause theory that clearly grew out of an economically-motivated pseudoscientific narrative that a person with this kind of disorder simply has a ‘broken brain’ and must therefore be a customer for life.

We should all long for the day when the ‘chemical imbalance’ theory is relegated to the history books, next to phrenology, bloodletting, and the use of mercury elixirs. 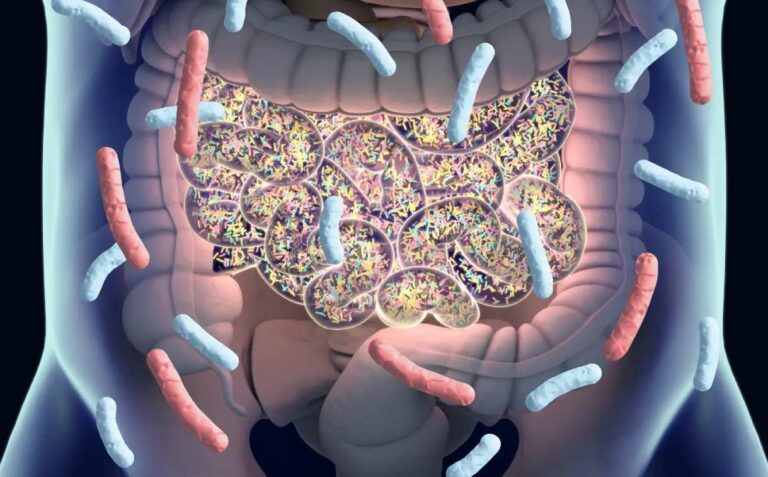